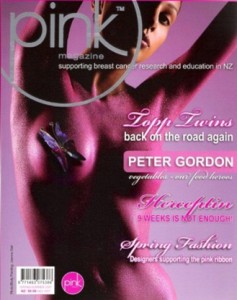 What makes a high-flying executive swap her day job for holistic healing? And how did she manage to fight off breast cancer in the process?

To look at Elizabeth Meadows, you’d be hard-pressed to find the woman who – until not so very long ago – was the HR Manager for Microsoft New Zealand. Her mid-length blonde bob has been replaced with a short, gamine cut and she’s not afraid to say that she’s dropped a few dress sizes … “chemo will do that for you” she says dryly.

Elizabeth says her story isn’t much different from other breast cancer sufferers. “I was a busy wife and mother, who was used to working 12 hour days and looking after others. Stress was a daily part of life” she said.  “I didn’t have time to focus on myself, so I just kept going. Most women can identify with that.” Elizabeth’s daughter Sarah had recently returned from overseas, and twin sons Robin and Gareth were getting on with their lives when Elizabeth decided to make the break from the corporate world to a life of holistic healing.

“I discovered Jin Shin Jyutsu (pronounced gin shin jit-soo) when one of my sons  was struck down with a mystery illness” said Elizabeth. “Here was this strong, fit 19-year-old who was curled up in bed, in total agony, and the doctors couldn’t tell us what was wrong. He’d been given every conventional test under the sun, but no answers or possible cures. He had three years of suffering like that, and became desperately ill and terribly depressed,” she said.

“I had been told about Jin Shin Jyutsu by someone and thought “what do we have to lose?” – so we took him along to a practitioner. He had two sessions and hasn’t been sick since,” she said, smiling. “After that, I decided I should find a bit more about this wonderful process, and spent the next six years studying Jin Shin Jyutsu.”

“The subject fascinated me,” continued Elizabeth “and eventually I decided I should follow my heart and go into practice for myself. So I set up my treatment rooms at home and said goodbye to my Microsoft family after 14 years. It was a big step – made fundamentally bigger when I discovered a lump in my breast 3 months later!” Elizabeth had been diagnosed with breast cancer.

“Before this, I had never been sick, and I felt invincible,” said Elizabeth. “When I discovered the lump, everything stopped. I’d given up my job in a prestigious company, and my safety net had gone. I had to re-evaluate everything in my life and make some significant changes.”

Elizabeth discussed all her options with her surgeon and oncologist. As well as having the tumour removed, she would undergo 4 sessions of chemotherapy and a 20-day course of radiotherapy. Alongside the conventional treatment, Elizabeth also had Jin Shin Jyutsu treatments three times a week – stepping it up to daily treatments when she started chemotherapy.

“My sister came with me to every chemo session,” said Elizabeth “and we did some simple JSJ holds. “Once they hooked up the drip, I could feel the coldness of the chemicals as they trickled up my arm. My sister would hold opposite fingers and toes to help keep the energy flowing and help move the chemicals through the body to eliminate them as quickly as possible,” said Elizabeth. “Once the chemotherapy drugs are in your body tissue, it burdens the liver and really slows the body down.”

Elizabeth had a JSJ session with her friend Sandy after each radiotherapy session .  Sandy sat at her feet, with her palms placed gently on Elizabeth’s calves while she (Elizabeth) placed her left hand on the treatment area and placed her right hand on top. “That hold can be used for any burn,” she explained. “It takes the heat out of the tissue and minimizes damage.”

“I’m convinced that having the JSJ treatment helped me through every part of that process,” said Elizabeth. “It helped me to mentally prepare for what my body would go through, and kept me calm and centered. I didn’t have a huge see-saw of emotions.”

“I recovered quickly from the surgery, however during the chemo phase, I did lose my hair” said Elizabeth. “Most people thought my wig was a ‘great new style,’ which was quite sweet, but I “retired” the wig on Christmas Day 2006. It was very liberating,” she said.

“During the chemotherapy, there was a chance my chemo treatments would be put on hold because my white count was so low. To help it improve, I did a simple JSJ hold and the count doubled overnight. It meant we could continue with the chemo regime,” she said.

“When I went back 9 days after my radiotherapy had finished, there was very little evidence of having had radiotherapy. I didn’t show any oedema or surface tissue damage and the usual side effects of sunburn and blistering weren’t there either,” said Elizabeth.

“I know that my experience is totally personal, so I’m not holding it up as a cure-all for cancer,” said Elizabeth, “but Jin Shin Jyutsu was a key tool in my toolbox and, at my one-year check-up, the oncologist was amazed with my progress. I’m cancer-free!” she said. As well as ongoing JSJ treatments, Elizabeth bolstered her vegetarian diet with vitamin supplements and has cut down her caffeine and alcohol intake.

“This last year has been a turning point in my life,” said Elizabeth “and I am looking for ways to give others the chance to experience what Jin Shin Jyutsu can do for them. I’ve approached the Sweet Louise Foundation to offer my services as a JSJ practitioner. My vision is to open a centre in Auckland focusing on all aspects of holistic healing, where people can come for a variety of treatments and step back from the stress of daily life. It’s this ongoing stress which is killing us, she said.”

Elizabeth has her clinic in and Kohimarama and can be contacted via her website or by phoning 09 521 1794.

Crop horror: Paris Hilton has a 'hair extension malfunction' on the red carpet By Daily Mail ReporterUpdated: 14:17 EST, 15 August 2008 Confidently walking on to the red carpet in Hollywood last night, Paris Hilton looked sleek and glamorous as she posed for the paparazzi.pre bonded hair But despite her groomed appearance, all her efforts to look good were undone when she turned around to reveal a hairstyle malfunction.

It appeared the socialite's hair extensions hadn't been applied properly - or it was time for an upgrade, as the extension clasps were exposed to fellow partygoers. Hair-raising: The socialite's hair looks natural from the front, but upon closer inspection her extensions are exposed After abandoning her waist-length hair extensions last year, many fans assumed Paris's current shoulder-length crop was her natural hair. However, as she stepped out at the opening of new nightclub Apple Lounge on Thursday, it soon became apparent that her luscious blonde hair wasn't all hers. Paris's frequent use of hair extensions isn't just a hobby - she's been the face of US hair extension company DreamCatchers since January 2007. Working the red carpet: From the front, Paris's hair 'issues' aren't evident remy hair extensions Speaking of her love for hair extensions, Paris said: 'I think beautiful hair is the ultimate accessory. We use the best quality extensions and they always look fabulous. The hotel heiress, 27, left her rocker boyfriend Benji Madden at home for a girls' night out with younger sister Nicky, 24, who brought along her beau David Katzenberg. Also at the star-studded bash was Lindsay Lohan and her DJ girlfriend Samantha Ronson. More extensions: Lindsay Lohan, who attended the bash with Samantha Ronson, was also wearing hair extensions

Next week will see the conclusion of the 12th season of The Bachelorette, as Joelle 'JoJo' Fletcher gets engaged to either Jordan Rodgers or Robby Hayes. And according to a new report, there's set to be a dramatic break-up ahead of the romantic proposal. Us Weekly claims that JoJo comes to the difficult decision of choosing between the two suitors after one of them makes a big mistake with her parents Joseph and Soraya. Family matters: Joelle 'JoJo' Fletcher apparently picks her fiance in next week's Bachelorette finale after one of the men makes a big mistake with her parents Who will it be?: Jordan Rodgers (L) and Robby Hayes are the two men left in the competition, and one of them allegedly gets sent packing after failing to ask JoJo's parents for her hand in marriage The runner-up gets dumped after failing to ask the 25-year-old's parents' for her hand in marriage, and during the emotional rejection, JoJo confesses that she wanted things to turn out differently. 'JoJo was sobbing,' a source told Us Weekly. 'She told him, “I wanted it to be you.”'cosplay wigs The insider added: 'It was important to JoJo that the guys get her parents’ permission before proposing. JoJo viewed it as disrespectful that he didn’t.' Us Weekly claims that JoJo's family liked both of the finalists, but thought that the man she eventually picks was better suited to her. Favourite from the start: Jordan received the First Impression Rose and his relationship with JoJo has gone from strength to strength ever since Not true: The 27-year-old former quarterback has denied that he cheated on his last girlfriend 'Everyone thought he was husband material,' a source said. 'Later, they told JoJo that they liked the other man too, but they thought the second would be more loyal and a better fit.' And speaking about the family's meeting with the runner-up, the insider revealed: 'After he left, Soraya said she thought he was a player.'

It seems that JoJo did make the right decision however, as she is apparently still very happily engaged to the winner. She likes what she sees: JoJo has also fallen in love with former competitive swimmer Robby, 27 Denying the rumours: Robby has refuted claims that he dumped his girlfriend to appear on the show Former quarterback Jordan, 27, has been a favourite to win the show from night one, when JoJo presented him with the First Impression Rose. Show secrets: Us Weekly revealed details of the dramatic finale And while on Monday's episode of the show he was seen telling the real estate developer that asking her father's permission to propose would be very important to him, a clip for the finale showed JoJo asking if he is ready to get down on one knee. Both of the finalists have faced rumours about past relationships, with Jordan's ex Brittany Farrar claiming that they broke up because she cheated on him. He denied this to JoJo on the show. The footballer is estranged from his famous NFL star brother Aaron, whose girlfriend Olivia Munn is close pals with Jordan's ex-girlfriend. Aaron finally addressed his younger brother speaking about their fraught relationship on the show during an interview with WISN on Tuesday. 'As far as those kinds of things go, I've always found that it's a little inappropriate to talk publicly about some family matters, so I'm not going to speak on those things,' he said. 'But I wish him well in the competition.' Meanwhile a friend of Robby's ex-girlfriend Hope Higginbotham has claimed that he dumped her in order to go on The Bachelorette, something which he denied during last week's hometown dates. The Bachelorette finale followed by the After The Final Rose special will air on ABC on Monday.lace front wigs She made the right choice: JoJo is apparently still happily engaged to the winner, who popped the question in May. The finale airs on ABC on Monday